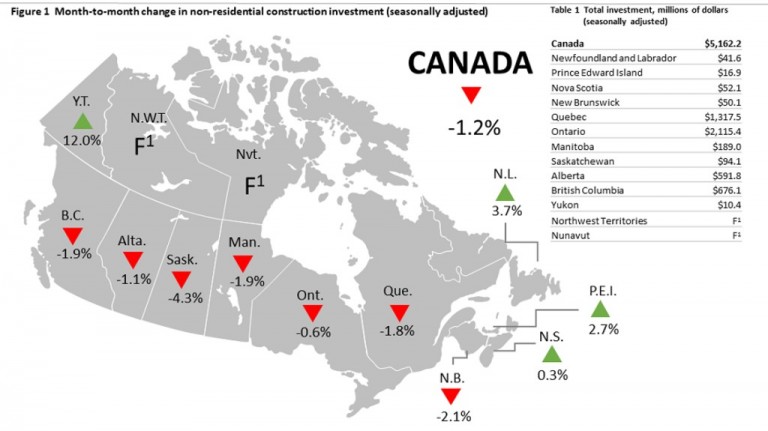 
Non-residential funding declined 1.2% to $5.2 billion in August, with decreases reported in all three parts. Declines had been posted in seven provinces, with the biggest decline recorded in Quebec. New Brunswick posted its seventh consecutive month-to-month lower, down 2.1% in August. Regardless of these declines, August ranges stay greater than February 2020 pre-COVID ranges for all parts besides industrial funding.

Nationally, the economic element was down 1.4% to $895 million in August, with declines reported in seven provinces.

Funding within the industrial element was down 1.5% to $3.1 billion in August. Positive factors in Newfoundland and Labrador (+12.2%) and Prince Edward Island (+8.3%) had been outweighed by declines within the eight remaining provinces.

Funding within the institutional element of non-residential funding edged down 0.5% to $1.2 billion. The vast majority of the declines had been reported in Ontario and Quebec, greater than offsetting good points in Alberta, Nova Scotia and New Brunswick.

Funding in residential development rose for the fourth consecutive month in August, up 8.2% to $10.8 billion. Single-unit funding rose 5.4% to $5.4 billion, whereas multi-unit funding was up 11.2% to $5.4 billion, barely surpassing single-unit funding ranges. Multi-unit funding good points had been reported in 9 provinces, led by Alberta (+42.4%) and Quebec (+15.8%). The expansion in Alberta was pushed by the development of a number of high-rise flats within the cities of Calgary and Edmonton. Prince Edward Island was the one province to report a decline for the month (-17.3%). Residential development values in Canada exceeded February 2020 pre-COVID ranges for the primary time in August.

Yanmar updates mini excavators for consolation, ease of use and extra